In California and in the United States as a whole, agriculture, farm, immigration and labor issues are closely related. The seasonal nature of farm work and the fact that a high percentage of farmworkers are foreign-born (most are from Mexico) mean that many farmworkers and their families are vulnerable to living in poverty. In California, the farm labor force is made up primarily of immigrants, most of whom are Hispanic and work for low wages. Farm communities have some of the highest rates of poverty and unemployment in the state.

Despite the fact that many low-income immigrants are eligible for government aid programs, immigrants working in agriculture may be less likely to receive such support. In a recent study, both documented and undocumented immigrant farmworkers were found to have lower participation in the government sponsored Supplemental Nutrition Assistance Program (SNAP) - formerly known as the food stamp program - compared to citizen farmworkers. The study, titled “Changing SNAP-Participation Trends Among Farmworker Households in the U.S., 2003-2012,” was published in the Journal of Immigrant and Minority Health and was partially funded by the Western Center for Agricultural Health and Safety (WCAHS).

A program of the U.S. Department of Agriculture, SNAP helps provide food for low-income families and individuals, helping to promote food security. Immigrants are eligible if they are documented and have resided in the U.S. for five years. Children born in the U.S. are eligible, but not their undocumented parents. 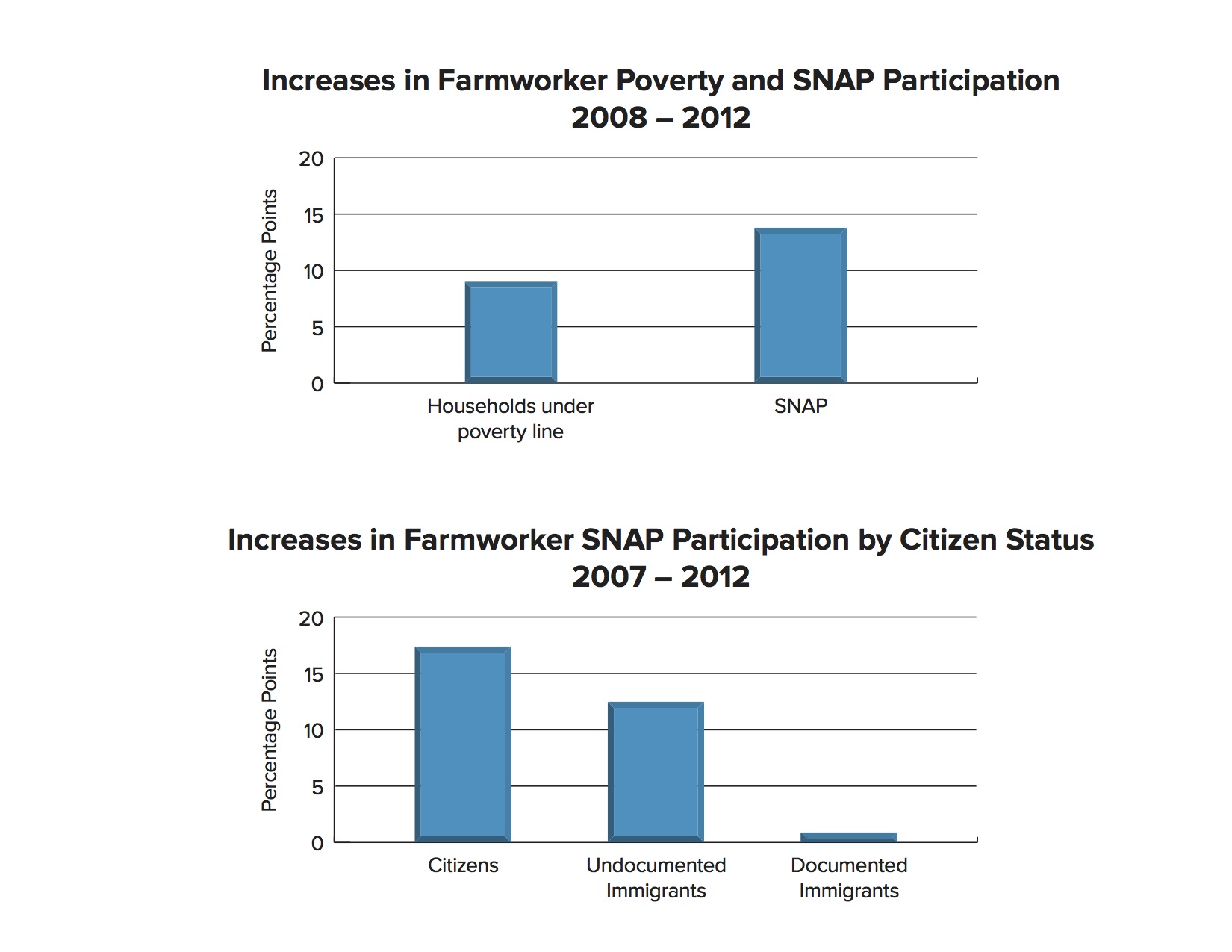 Study authors Alvaro Medel-Herrero and J. Paul Leigh analyzed data from 18,000 households in the National Agricultural Workers Survey (NAWS) from 2003 to 2012. NAWS includes information on demographics, health, employment, and immigration issues. The study looked at differences in SNAP participation between citizens, documented immigrants and undocumented immigrants, with a focus on the post-financial crisis years of 2007 and 2008, when low income families are most likely to be in need. Nearly all of the immigrants in the study were Hispanic.

Hispanic citizens were not as likely to use SNAP

For both documented and undocumented farmworker immigrants, the likelihood of SNAP participation was 40% to 43% less than white citizen farmworker households. This disparity is significant given that immigrant households, both documented and undocumented, are more often likely to be most dramatically affected by periods of economic recession. Also, Hispanic farmworkers who were citizens were 30% less likely to use the program than their non-Hispanic white counterparts.

Need to increase participation of farmworkers eligible for SNAP

The researchers found that the strongest predictors of farmworker participation in SNAP were household poverty level and the ages of children in the household. One of the significant aspects of this study is it highlights the continued vulnerability of immigrant farmworkers, in terms of the disparity in participation in programs intended to benefit them. Further research would be helpful in terms of identifying barriers to program participation, particularly among documented immigrant farmworker families who are eligible for SNAP.

* This article first appeared in a prior version at UC Davis Health, written by Karen Finney, at https://www.ucdmc.ucdavis.edu/publish/news/bariatric/12073.