California is the number one milk producer in the United States, producing 19% of the milk for the nation. The California Department of Food and Agriculture reports that California has more than 1,300 dairy farms with over 1.7 million cows and over 18,000 workers to care for them.

Dairy farming requires a large, robust labor force to work around the clock in the milking parlor, feeding calves, managing nutrition and manure, and more, all while handling large animals and working with machinery.

When handling manure or working with sick animals, workers run the risk of exposure to pathogens called zoonotic diseases—infections caused by viruses, bacteria, and parasites that are transmitted from animals to humans or vice versa. California dairy farms often have one or more cattle infected with zoonotic pathogens, such as Shiga-toxin producing E. coli, Salmonella, and Cryptosporidium parvum. These bacteria and parasites can cause mild to severe sickness in humans, including diarrhea, stomach cramps, fever, and in worst case scenarios, death. 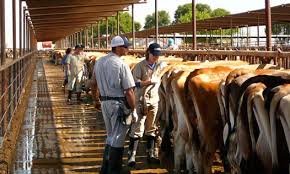 To protect dairy workers from the occupational risk of pathogen exposure and zoonotic diseases, WCAHS investigator Dr. Robert Atwill, DVM, MPVM, PhD and his laboratory manager and PhD student, Jennifer Chase, of UC Davis are collaborating with three working dairies in the California Central Valley to develop laboratory methods to quantify bacterial pathogens that are endemic in dairy cattle populations in large commercial California dairies. The goal is to simultaneously quantify these specific pathogens while investigating exposure risks in the dairy worker population. 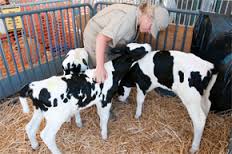 In addition to identifying pathogens, the researchers will focus on how to reduce occupation exposure to zoonotic pathogens through worker observation studies. The observations may reveal better strategies for effective use of personal protective equipment. Dairy workers will be observed as they complete their daily tasks. Job tasks that pose the highest risk for workers to acquire zoonotic diseases will be identified in order to enhance farm safety protocols and engineering controls as needed. These modifications may include reinforcing current protective methods that, as Dr. Atwill states, “make the safety practices more effective and dairy-specific.”

This article was originally written by WCAHS intern, Anthony Kalife, in 2016 and has since been updated by WCAHS staff with recent statistics and research findings.